​Written by:
The Rt. Hon. Malcolm Ian Sinclair P.C.
“Wine is strong, a King is stronger, women are stronger still, but truth conquers all”
Inscription in Rosslyn Chapel built by William Sinclair, Earl of Caithness, mid 1400s
Clan Information
Origins of the Family
The family probably originated from France and settled in Scotland in the 1100s. The first charter of land to a Sinclair in Scotland was in 1162 from Henry de St Clair for the lands at Herdmanston, about fifteen miles east of Edinburgh. The Sinclairs soon increased in numbers, wealth and importance in the south of Scotland. In the mid 1300s there was a dynastic marriage between Henry Sinclair of Roslin and Isabella, who became the last surviving heiress of the Norse line of Jarls of Orkney and Caithness, who trace their ancestry back to Rognvald of Moeri (in Norway) ‘the Mighty’ 1st Jarl of Orkney in about 870. The power, influence and land holdings throughout Scotland increased dramatically as the family now served two kings – those of Scotland and Norway for about one hundred years.

Profile of the Clan Today
There are Sinclairs in many parts of the world and the first clan association was formed in Canada in 1972. There are now associations in Australia, Italy, Romania, Scotland and USA. Since 2000 there have been regular International Gatherings involving Sinclairs from these countries as well as France, Northern Ireland, New Zealand, Norway and South Africa.

​A cross engrailed Argent and Sable (Silver/White and Black) first used as a seal by Sir William Sinclair of Roslin in 1292.
​Now in common use by many Sinclairs.
The Differentiated Arms 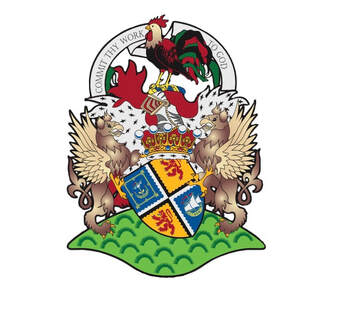 ​Quarterly, 1st, azure, a lymphad at anchor or, flagge gules, sails furled Argent, oars in saltire or within a Royal Tressure or (Earldom of Orkney); 2nd & 3rd, or, a lion rampant gules, armed and langued azure (Sparr-Nithsdale); 4th, azure, a three-mastered ship or, flagged gules, under sail Argent (Earldom of Caithness); overall a cross engrailed and counter changed argent and sable (Sinclair) supported by two griffins, gules wings elevated, armed beaked and winged or Crest:  a Cock Proper and a motto
​‘Commit Thy Work to God.’
​
The Standard

This is a long, narrow tapering flag, granted by the Lord Lyon only to those who have a following, such as Clan Chiefs, because it is a 'Headquarters' flag. It is used to mark the assembly    point or Headquarters of the Clan or following, and does not necessarily denote the presence of the Standard's owner as the personal banner does. 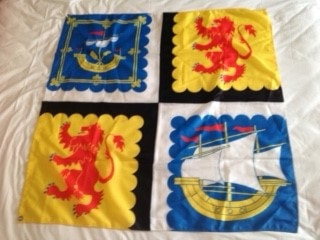 ​​This is the personal flag of the owner of a coat of arms (an 'armiger'). It shows his personal coat of arms granted by the Lord Lyon or inherited in right of an ancestor, and protected by the Law of Scotland. Its purpose is the location and identification of its owner, and it is the visual equivalent of name. No one else may use it. Flown over the house it denotes that the armiger is there.
The Pinsel

​
This is the flag denoting a person to whom a Clan Chief has delegated authority for a particular occasion, such as a Clan Gathering when the Chief is absent, in a word, the flag of the Chief's representative. It displays the important information about the Chief and the Clan. Thus, on it is shown the Chief's crest, within a strap bearing the motto, and outside the strap and buckle a gold circlet inscribed with the Chief's title. On top of this circlet is set the owner's coronet of rank or his baronial cap. In the fly is shown the owner's plant badge and a scroll inscribed with his slogan or motto.
Clansman’s Badge 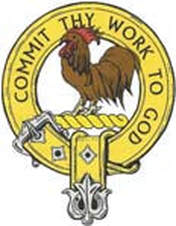 ​Consists of the Chief’s Heraldic Crest and Motto or his Differentiated Arms and as shown on the Pinsel.
A Cock Proper armed and beaked or within a strap of Leather Proper Buckled and Embellished Or (loosely translated as a cock in its natural colours, with talons (spurs) and yellow beak within the traditional leather belt and yellow (gold) buckle with the Motto:
“Commit Thy Work to God”

Note: The drawing of the Cock is, therefore, open to the artist and is also shown with its wings open. 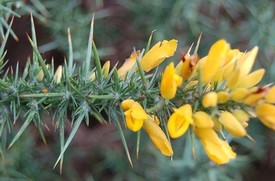 ​This is defined by that in the Pinsel and is Gorse (Whin).

Sinclair Tartan
There are several Sinclair tartans. As of June 2017, there are eight registered with the Scottish Register of Tartans but there are also a few others that are not registered. The two most commonly used are;
Septs of the Clan

There is no definitive list of Septs for any clan/family. The chief could choose who would be a member of his clan. Historically many of the sept families would have followed the local chief and thus formed a dependency on him.

[2] Matriculated by The Lord Lyon and in Public Register of All Arms and Bearings in Scotland.

[3] The St. Clairs of the Isles by Roland William Saint Clair published 1898 and Caithness Family History by John Henderson 1884.