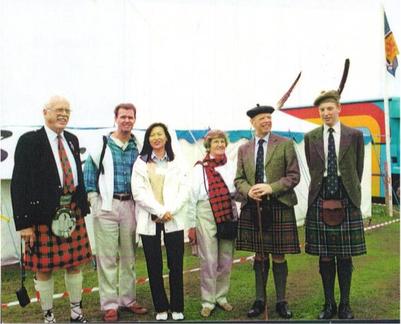 Halkirk Games Day. The day was cloudy but after early morning drizzle dried up. The forecast was fair - almost ideal for the Games.

At 10.00 Don Sinclair (the senior USA Commissioner and representing Brad), Bill Sinclair (President Canada), Jamie Sinclair (John's son), Niven and Berrie, who were to be the banner party for the church service the next day, met at the Church for the rehearsal. That over, we went to Halkirk to check out the tent etc. Ian and the Noss team were there with the new mobile shop full of goods parked next door to the tent. Banners were raised and everything made ready.

Walked down to the Ulbster Arms where people were beginning to assemble and said hello to the Games Committee. Iona drove past the Police "No Entry" sign and arrived in my car, which she had picked up in Inverness, where I had left it with the Bowens three weeks earlier, after her night sleeper journey north. Linda Hellmann lent Iona her room in which to change.

The coaches arrived; Gunns and Sinclairs milled around chatting; the pipe bands - The Grampian Police and Cape Town Highlanders tuned up and then we started to assemble. Margaret Thurso as Chieftain in the first row; Iain Gunn, John Thurso, Margaret Carmichael and me as usual in the second, then the bands followed by the Gunns and Sinclairs side by side, with Berrie leading carrying the Clan notice. We outnumbered the Gunns over one and a half to one.

Like a huge crocodile we marched onto the field - another first. When I reached my allocated position and stopped I looked back and the Sinclairs were still coming onto the field - a wonderful sight. Margaret opened the Games and then we all went to the clan tent for a delicious buffet lunch.

Halkirk is a lovely small village games where everything takes place in one arena so you can see it all happening without having to move.

Rory competed in the piping and was commended for his musical ability. Others took part in some of the sideshows like the clay pigeon shooting. The tent was busy all afternoon and the shop did a brisk trade.

Soon after five the tent started to fill up and as the evening chill was starting it was a good time to have a dram. Old Pulteney, the local Wick distillery owned by Inver House, had kindly sponsored twelve bottles of their 12 year old malt and we soon had a dozen empties but were feeling better for it. In the middle of it the Clan Sinclair pipers Rory, David and John MacIntyre from Australia played for us.

As we topped up peoples glasses I recall Donald JH saying he had had enough but I told him his wife, Mary, wanted to say something to him. When he turned round to hear her I filled up his glass - and he drunk it!

The coaches went back to their various hotels and everyone had a free evening.

The drum major of the Cape Town Highlanders wanted some heather so Iona and I went to Strathmore to pick some. We listened to both the bands playing outside the Ulbster Arms in the evening, which is the traditional event after the Games have finished and the Cape Town Highlanders were superb. The locals reckoned they were the best band to play at the Games - bad luck on the Grampian Police who are pretty good too.

Then on to the Weigh Inn with the Cape Town band following as they had agreed to perform for us there. After the formal performance outside on the Terrace with the Orkneys and the Pentland Firth as a backdrop Iona presented them with a Scottish thistle and Mary Selver with the heather. They then came inside and an amazing Ceilidh started.

I have never heard the like! The African drummers got that instinctive beat going - it can never be taught - and joined by a solo piper following as best he could. It was a memorable performance. The word spread and soon locals were in the bar too and they were amazed. What a day! what a party! what a great clan we have!
​
We bade farewell to the band who had to return to Edinburgh the next day to prepare to play in the Tattoo there and headed for bed.
< Previous: Friday 28th July         Next: Sunday 30th July >