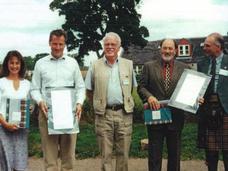 ​Rosslyn day. The two coaches from the Capital Moat House went to Rosslyn as did Niven and had a good morning there at the Chapel and the Castle. Whilst there Rory presented his pipe music composition The Rosslyn Chapel Suite to Peter and Stuart.

Berrie took a group to the HMY Britannia and I took the others to Edinburgh Castle.

We all met up for lunch at Harry Ramsdens, which worked well but the queue for the bar was a bit slow. Edna Kerr and Deidre Kinloch Anderson gave a talk and demonstration about the old and modern kilts. The microphone was not very good so some did not hear but they dressed Ward Ginn up in the traditional garb.

In the afternoon the coaches reversed roles. Rory took a group to Britannia, Don did the Castle and Berrie and I went to Rosslyn.
What an effort Peter and Helen Rosslyn had made. They took a week's holiday to be up there for us and they gave us free run of their Castle to wander as we wished.

Stuart Beattie (the Curator) also did well in the Chapel and apart from a short sharp shower in the afternoon most saw both places in sunshine although a little rushed.

Soon after five the two buses from Edinburgh returned in time for the evensong Service. The Chapel was full with seats in the Lady Chapel: Peter and I read lessons; Michael Fass conducted a moving and memorable Service. When was the last time so many Sinclairs were in the Chapel and it came so alive?

We ended with the hymn Amazing Grace and after the organ stopped Rory played two refrains on the pipes - the second as he walked out of the Chapel and it faded away. Many more tears and another surprise that worked.

Peter had a farewell gift for everyone with his and my coat of arms on it to commemorate the occasion.

We all returned to the Capital Moat House Hotel for a buffet supper and were joined by Yves Walker, an old friend, who takes private parties around Scotland and who had advised on the itinerary and the Hon Matthew St Clair (son of Lord Sinclair).

Quick dash to get as close to the Castle as possible to take our seats for the Royal Tribute - a memorable parade and display of Pipes and Drums, Massed Bands and dancing to celebrate Queen Elizabeth's Centenary. Slight hiccup as I had Berrie's ticket and was with a different part of the group but thanks to the mobile phone we sorted that out.

A long day but thoroughly rewarding. Organiza­tionally the most taxing due to strict timing and so many changeovers and options. Having given everyone strict instructions to stay on the same coaches we had to shuffle them today to fit everything in but they all ended up back in the right place. If we can do this without a major hitch the rest should be OK. 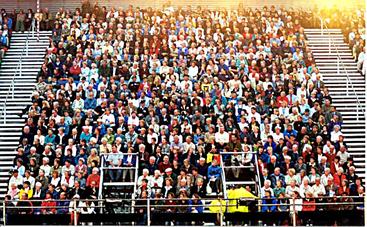